Engineered parts are player-invented game mechanics that are made of existing parts and have new functions. These have various usages such as longer landing legs, closeable fairings and even engines that don't need fuel.

These are engineered parts that function as intended in the most recent version.

The docking port engine (also called reactionless engine, reactionless drive, FTL drive, and Acarii drive), is any structure that exploits attractive properties of the Docking Port to create acceleration without use of fuel or power. Discovered by user Acarii on April 2nd, 2018, it is the first major form of free acceleration capable of getting to LEO from Earth's surface entirely under its own power.

The type of drive varies based on how its constructed, but is broken down into two groups. 'Permafire', and 'Toggle' drives. Permafire drives are called such as they can not be turned off once started without physically destroying or jettisoning the drive entirely, rendering it useless. Toggle drives (pictured, right) have systems installed that allow the drive to be toggled on and off as desired, by redocking the uncontrolled part by pushing it with a solar panel.

Typically, toggle drives are weaker than their permafire counterparts due to the added mass and sometimes interacting docking ports required to make them toggable, although depending on payload and drive design, this is not always the case.

How do drives work?

Drives utilize a bug in docking ports that multiplies the expected force of the controlled rocket. This extra force is not correctly accounted for in the game engine, allowing the rocket to push others out of the way. The force added by docking ports is framerate dependent, and not applied every frame, unlike other parts of physics. This is likely a performance saving measure, and results in the drives being heavily framerate dependent, the amount of acceleration will drastically shift based on the system it is run on. Drives work optimally when the game is set to 60 FPS on a system that can maintain this framerate indefinitely.

This bug was partially fixed in 1.5 but it still works but only with the No Gravity cheat on.

More information about drives and how they work can be found in Bugs/Reactionless Engine. 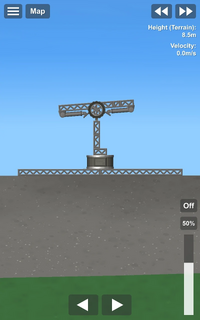 By overlapping half of a wheel (opposite the connection) with a structural part, clipping will prevent them from moving through each other, and landing legs on the underside (as shown in the image to the right) will prevent the top part from sliding off. The bottom part can be selected, and rotated, as a hinge, taking the top part with it.

Time warping locks orbits and can make the two components (which are separate rockets) phase apart, but it may be possible to connect them together when necessary.

Excepting this flaw, motorized hinges could potentially be used to make payloads more compact in fairings (to expand upon deployment in space stations and rovers), to move rovers' center-of-mass when stuck (to let them rotate back upright) or as adjustable suspension for heavy rovers, landing platforms and engineered landing legs.

Travel on celesital bodies' surfaces can be done without wheels touching the planet, using a motorized hinge attaching a ground platform to a controllable counterweight. This YouTube video demonstrates it.

The counterweight can move downwards and to the right, then quickly upwards and to the left, by rotating the hinge. The anticlockwise torque on the counterweight in the fast upwards action also provides clockwise torque on the lower platform, fast enough to lift its left side off the ground, creating upwards and rightwards momentum that can move the rocket when stopping the torque, allowing it to 'hop' over the ground.

However, the lower platform is very fragile, and walking machines aren't viable on some celestial bodies.

These are engineered parts which are no longer necessary as of the most recent version.

Docking without DLC before 1.4

There are various strategies for people not having the DLCs before 1.4 to dock their rocket. It should be noted though that these docks do not work in time warp.

Most designs use Landing Leg or Solar Panels as they were the only moveable parts at the time. The first known design was created by Space Core.

It makes use of the shape of both the capsule and the deployed landing leg to hold two rockets together.

Other ways of docking without DLC are solar panel docking, where the fast opening and closing of two solar panels facing each other causes them to glitch into one another and to maintain that position.

With the release of 1.4, free small docking ports were given to the player in exchange for advertisements if they do not have the full version, but after the deprecation of advertisements, they were made freely available without advertisements.

These are engineered parts which no longer function as intended in the most recent version, due to exploiting a bug that has been fixed.

RCS both using electricity and fuel 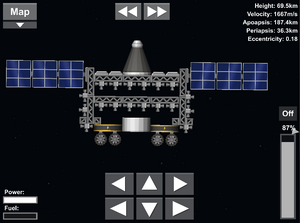 Until version 1.5, a bug allowed RCS Thrusters to work without a source of fuel when a Solar Panel is attached. The rocket has endless power to reach any destination.

The rocket listed here performed a landing on Mercury, Venus, Moon, Mars, Phobos and Deimos, then conducted a Fixed Point Landing to the Moon base and on Earth at the launch pad.

The rocket was built by Ana Imfinity, who named it Ana Electric or AE. However, other players discovered this bug which allows rockets to travel forever, so she does not claim an official name for her discovery, only documenting it so that other players can use this technology for their missions.

The Parts Expansion is not needed to build such a rocket. However, in versions older than 1.35, this may not work.

The rocket needs at least one solar panel, at least one fuel tank (the smallest one is sufficient), a probe or a capsule and many RCS thrusters. Or, one can add batteries, wheels, landing legs or a parachute. The entire construction must be linked together by structural sarts.

The smallest probe to leave Earth needs 6 RCS thrusters (one small fuel tank, one probe and one solar panel).

Deploy the solar panel and turn on the RCS thrusters. After all fuel is exhausted, the thrusters will keep operating. Drive the rocket to any destination you want.

RCS rockets perform differently than other, conventional rockets. Both in physics view and in map view, the player must use the RCS buttons (or the keys W, S, A and D (in default), if you are using the PC version), which allows the engine to fire only in four directions. The orbits you get are not as precise as with other engines.

Structural parts are light and while passing the atmosphere they generate a lot of friction. Because of this, a Venus landing requires no parachute, but a liftoff from Venus requires a large rocket.

The RCS thrusters have low thrust, so they must be large to lift heavy payloads. They will exhaust any type of fuel before using electricity, so it cannot be used to take fuel into orbit, unless the RCS-powered rockets are pushing other undocked rockets (see Helping Vehicle for details).