Europa is the smallest of the four Galilean moons orbiting Jupiter, and the second-closest to the planet after Io. It is smaller than the Moon and it is included in the Planets Expansion DLC along with Jupiter and the rest of the Galilean moons.

Landing on Europa may be a little difficult because of the high delta v requirement to get there, but it gets easy if you use some fuel-efficient methods to get there.

What to do on Europa

Europa's proximity to Jupiter and low gravity makes orbital insertions very hard and fuel-consuming. Try positioning in an orbit that intersects Europa's orbit to lessen the fuel needed to get into Europa orbit.

There are some interesting activities to do on Europa and drilling under the icy surface is one of them.

Europa’s atmosphere is a faint whitish-blue glow that unlike the other planets does not cause aerodynamic drag. Trying to deploy a parachute yields the message Cannot parachute in a vacuum since Europa has practically no atmosphere.

Europa's terrain has one of the smoothest terrains in the game, along with Earth. The terrain is mostly flat with a few hills emerging out of the surface. The hills are often not too tall and not too steep. They contain smaller hills and even smaller ones. The surface doesn't include any craters.

Europa’s low surface gravity and relatively smooth surface provide easy landing opportunities unlike the other Galilean moons. Surface bases are easy to set up, and rovers have no problem driving except for tipping due to the low gravity. Try to make the rover heavier or use several ion thrusters to push it down to the surface to prevent tipping.

Europa as seen from a low orbit. 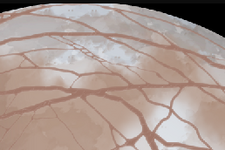 An early sneak peek of Europa, showing surface features (such as lineae, surface ice and craters). 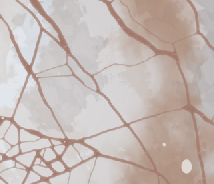 Another sneak peak of Europa with the surface features 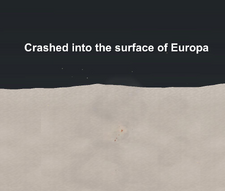 A failed mission to Europa