This page has been archived and locked for editing!

This feature has been removed from the game, and you may no longer edit this page. 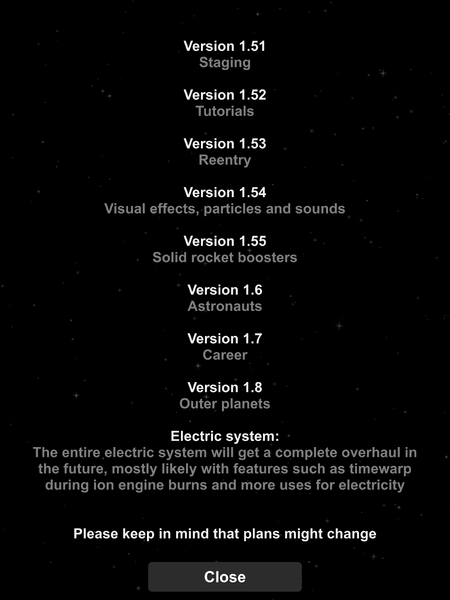 Future Updates is an in-game page, that shows what is planned for upcoming updates. You can access it by going to the "Future Updates" page from Spaceflight Simulator's main menu.

It was removed in version 1.5.4 due to plan changes.

More efficient (or cheaper) high-thrust engines with integrated fuel tanks, but which are uncontrollable after activation, and will burn until no fuel remains. See Wikipedia page on real-life SRBs for more information.

Extravehicular activity or EVA may be possible, for maintenance and manual activation of non-mechanical parts or transfer of crew between crafts (for instance if you want to keep a capsule on an extraplanetary base but take the astronauts if supplies (also future possibility) are running out).

More planets in the solar system, past Jupiter, possibly including Saturn and its moons, Uranus and its moons, Neptune and some of its moons and Pluto and Charon.

The entire electric system will get a complete overhaul in the future, most likely with features such as time warp during ion engine burns and more uses for electricity

Version 1.5 was originally intended to overhaul the electric system, but was released early without electricity, because the other features were improved enough without it. Currently, electric parts (Rover Wheels and Ion Engines) can function without electricity, well Batteries and RTGs can only be found via BP Editing ("Placeholder Battery" for battery and "Placeholder RTG" for RTG) or in saved blueprints that had them, and are just grey-black blocks and don't function. A future reimplementation of these features will add time warping during Ion Engine burns and more electricity uses, though when these will be implemented is still unknown.

The Example.txt translation file (which lists all translatable strings in the game) mentions 'solid fuel' as being distinct from 'fuel,' implying the solid rocket boosters addition in 1.55 is either already under development or has translations ready, and one unused category is called 'Boosters,' implying single parts will contain both fuel tanks and engines (likely also SRBs).