Io is the innermost and second smallest of the four Galilean moons of Jupiter. It is well-known for its striking yellow terrain and volcanoes like Venus. Io can be unlocked by purchasing the Planets Expansion DLC.

Landing on Io is hard due to its terrain and high gravity. It has the highest gravity of all the Galilean moons at approximately 1.8 m/s2.

What to do on Io

Io’s high gravity and proximity to Jupiter make it a little hard for gravity assists. Getting to orbit may take a lot to time to conduct.

A downside to Io’s high gravity is that orbit insertion burns can be quite expensive.

Io’s volcanoes aren’t very tall; any orbit(s) that go above 150 meters are safe.

The terrain is covered with a lot of volcanoes and steep cliffs. The cliffs are mostly small and have a steep angle that is almost vertical. These cliffs can be close together. When climbing a volcano, one side is smooth, while the other has many cliffs. The valleys have a few cliffs, but they are slightly shallower than the other ones. A volcano can sometimes have a crater on it.

The mountainous terrain of Io can make it difficult to land. Make sure that your lander has a wide base and ample fuel to prevent tipping and find a flat spot (like a spot between volcanoes, the peak of volcanoes or hills), respectively.

Driving rovers on Io is difficult, if not impossible. Steep cliffs can cause your rover to flip or fall and sometimes be destroyed. 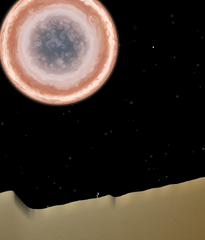 A picture from the surface of Io, showing Jupiter. This feature has not been implemented as of yet.

A mountain on Io