113,430 kilometers
Mars is the 4th planet from the Sun. It is half the size of Earth and it has 2 small moons — Phobos and Deimos. It has a thin atmosphere that is around 6.25 times as thin as Earth's, which is useful for Martian atmospheric activities.

Mars is often one of the first places a player goes after the Moon. It is also good for practice with landing with atmospheres, using another planet's atmosphere for activities such as aerobraking, and practicing docking on its moons. Most players choose to land a rover first on Mars.

What to do on Mars?

Mars can be used for gravity assists for going to other planets (like an asteroid belt object, Jupiter or something), but they tend to be fairly small because of Mars’ low mass.

Mars can rarely be a hindrance to Jupiter missions, as it can get in the way of transfer windows.

Since it is relatively cheap to get into orbit around Mars, it is a good location for fuel depots or space stations.

Two moons orbit Mars: Phobos and Deimos. They are irregular and they orbit close to Mars — closer than any other moon in the solar system. Both are small and have no gravity.

A player can practice docking of spacecraft on the moons during to their small size. Many players recreate sample retrieval missions on the Martian moons.

Phobos is the larger, inner moon of Mars. It orbits once every 8 hours around the planet and it is porous. Its color is reddish or pinkish.

Phobos can be the key for the exploration for Mars.

Deimos is the smaller, outer moon of Mars. It is around twice as small as Phobos and it is yellowish with a smooth terrain.

Mars has a thin, reddish atmosphere that ends 20 kilometers above its surface. Its atmosphere is 0.16 times as dense as Earth's. Despite its thinness, it is sometimes useful.

Mars's atmosphere has the lowest curve (coefficient on how fast the atmosphere fades) of all the celestial bodies in the game — measuring at 8 — which is a quarter less than that of Earth, at 10.

Mars’ atmosphere allows the use of parachutes, which can be used to slow your rocket down, but oftentimes not enough to prevent damage. Parachutes can be deployed as early as 4.5 kilometers, but there might be some heating effects still present at this altitude.

The thin atmosphere of Mars both reduces drag for lift-off and for entry, meaning that retro-burners for heavy or manned landers is advised.

In the planet editor, the file name for Mars’s atmosphere is Atmo_Mars.

A guide to landing on Mars can be found here: Getting to Mars

The surface of Mars is covered in smooth, red rolling hills and some craters and is spotted with the occasional mountain structure called Olympus Mons. This makes Mars an ideal location for driving rovers, doing some research or building Martian bases/colonies.

Be careful when landing on steep slopes, as rockets with a high center of mass or thin bases will tip over and will be destroyed easily.

There are several landmarks on Mars.

Olympus Mons is a volcano on Mars that extends up to 3.9 kilometers in the Martian atmosphere. It was added in the 1.4 update.

Olympus Mons is a good location to avoid the effects of Mars’s atmosphere, although parachutes can be deployed at 2500 meters above the surface of the volcano. It can be also used for challenges such as climbing on the structure using an airplane or ground vehicle, or setting up some Martian bases/colonies.

Valles Marineris is a valley on Mars. It is near the equator of the planet. The valley is deep — it is 3× the depth of the Grand Canyon. Its size can stretch across the United States.

Rockets that land on the valley will have little to no issues at all. They may find water or even some special rocks on the surface. Valles Marineris is also a good landing site for rovers and sample return missions.

If the rocket lands on the sides of the valley, it will tip over to the side and fall to the ground, causing severe damage to the rocket.

Hellas Planitia is a basin on Mars. It is also the deepest point on Mars, at 8.5 kilometers below sea level. Surrounding this basin are a few craters that are small in size. They get deeper when getting to the sides.

This may be a prime landing spot on Mars, as its low elevation gives more atmospheric drag for parachutes to slow down a rocket to slower speeds than in sea level.

Gale is a crater on Mars. It has a mountain on the center of it. It is related to the real life mountain called Aeolis Mons or Mount Sharp.

The Curiosity rover landed on this crater to find the ingredients of life and to investigate rocks on Mars.

Utopia Planitia is a circular plain on Mars. It is relatively flat with a few craters. The Viking 2 lander landed on this site inside a crater called Mie.

Arcadia Planitia is a plain on Mars situated at the northwestern side of the Tharsis region. Its southern side is filled with some deep craters.

There are four achievements that can be obtained on on Mars: 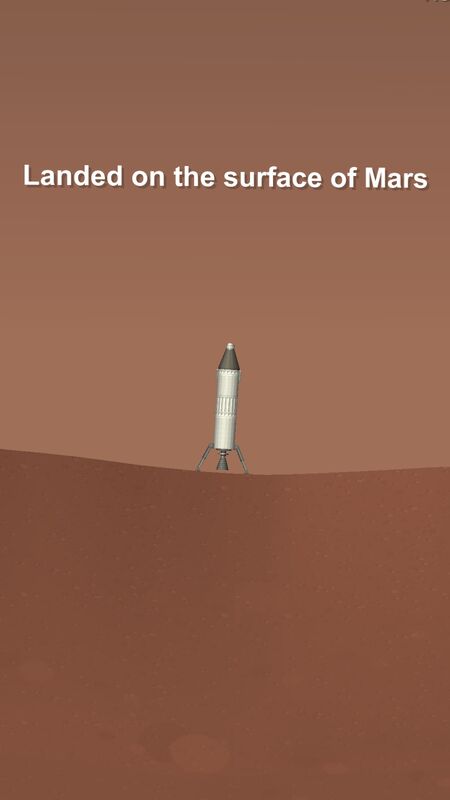 A small rocket that recently landed on Mars. 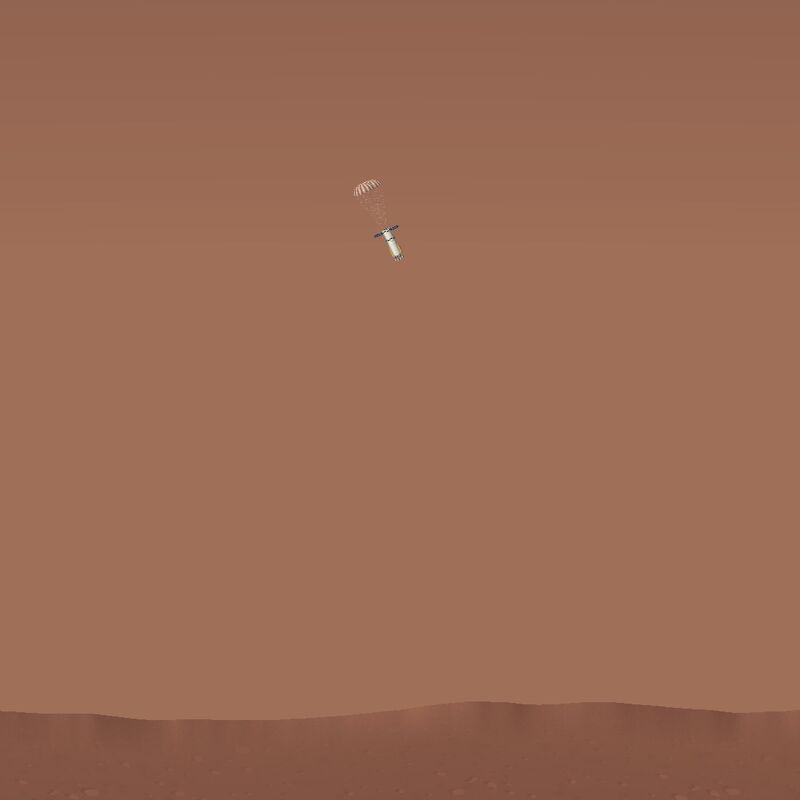 A large rocket using solar panels for stability and parachutes to slow its descent. 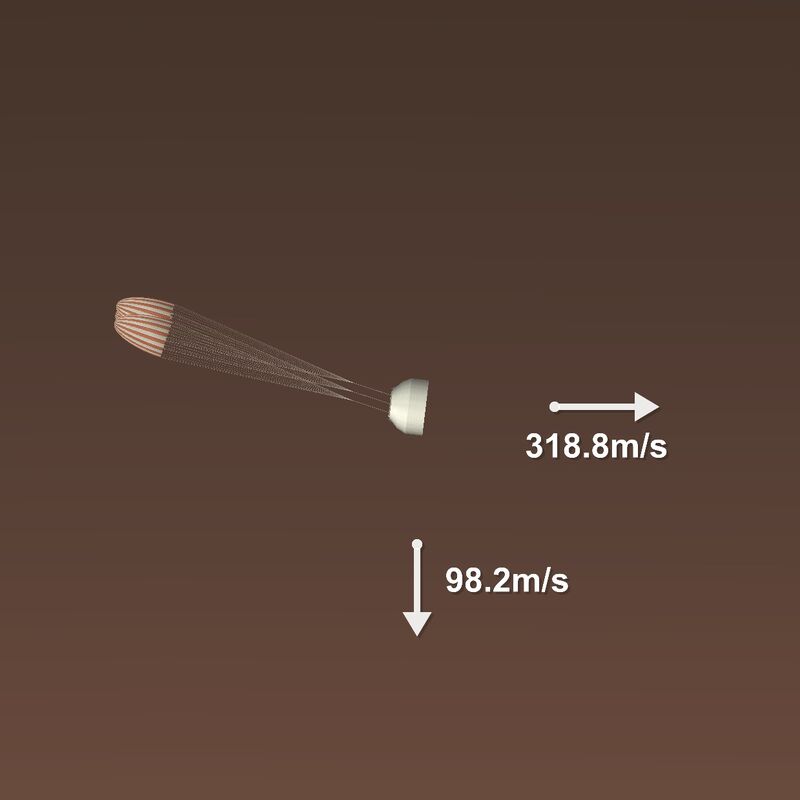 A probe in Mars’s upper atmosphere during its descent. It's using 3 parachutes to slow down its descent to the Red Planet. 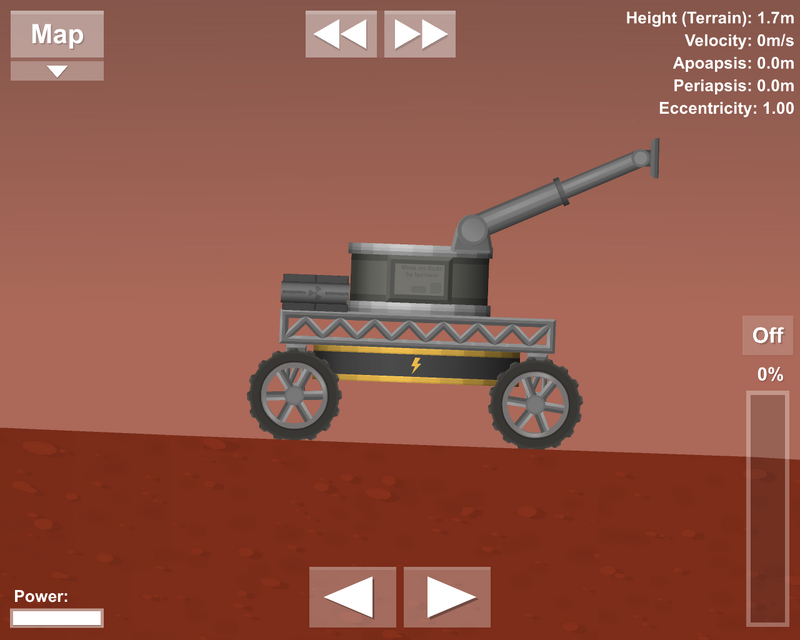