11,710 kilometers
Mercury is the closest planet to the Sun and the smallest planet, preceded by Mars. It is a mottled gray airless, moonless world. Mercury is also one of the hardest planets to reach on due to the proximity to the sun and low gravity.

Mercury's surface is very rocky, and it has a lot of craters like the Moon. Mercury has 2 landmarks called Caloris Planitia and Borealis Planitia.

What to do on Mercury?

Due to the difficulty of orbiting and landing on around Mercury (and returning back to Earth), successful missions are seen as great achievement all over the SFS community.

The delta-v it takes can be reduced by multiple gravity assists off of Venus and Mercury itself, as well as sitting at low heliocentric orbit between Venus and Mercury, using Venus to go to Mercury, and many more.

If you feel you have gotten the hang of getting to Mercury, you can try building a Space Station or a refuelling station to aid future missions.

Mercury has no atmosphere.

Like the Moon or Callisto, Mercury has many craters. Unlike those two, however, Mercury’s craters are deeper and a little more spread apart.

There are only 2 landmarks on Mercury. Mercury has the lowest number of landmarks of any planet in the solar system.

Borealis Planitia (Latin for Northern Plain) is a plain on Mercury. It has several craters inside it. This can be a landing site for some landers because of its flatness.

Caloris Planitia (Latin for Plain of Heat) is a plain on Mercury; like Borealis Planitia, it has several craters and hills and it's marked by a mountain on the centre of it. At the sides of the basin there are a couple of tall mountains; they are called Caloris Montes (Mountains of Heat).

There are two achievements that can be obtained on on Mercury: 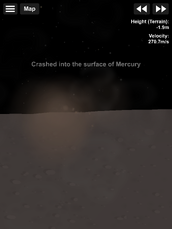 A rocket crashed on Mercury's surface because of a failure. 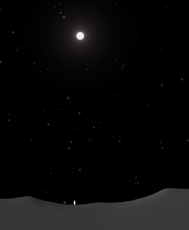 A picture on the surface of Mercury showing the Sun. This is still not implemented yet.