Solid rocket boosters (abbreviated as SRBs) are boosters that are designed to boost the rocket to reach space. They contain solid fuel inside it, instead of liquid fuel. Once ignited, they cannot be throttled or stopped until they run out of solid fuel. They are available in two sizes, one is the size of a 4×5 fuel tank, the other is the size of the 4×9 fuel tank, and one for the Space Shuttle. They cannot be skinned/painted.

The 4×5 Variant is free. The 4×9 Variant is accessible upon enough funds and researching 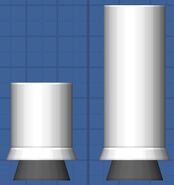